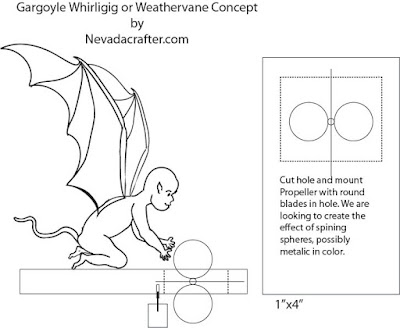 This is a concept idea and not intended as a pattern or plan. It has not been tested and may not work as suggested and further modifications may be required to make it work. The concept is to create a whirligig or weathervane with a gargoyle chasing or playing with a metal sphere.  Do not use metal disc for the propeller as they may fly off in high winds becoming a hazard. Instead we recommend using metallic paint on wood. Do not for get to angle the propeller blades so they catch the wind. If the propeller does not catch enough wind, a different design may have to be used such as mounting the gargoyle and propeller above the horizontal pivot.
(Note) the difference between a whirligig and a weathervane is that a weathervane only shows the direction of the wind, whereas a whirligig has moving parts powered by a propeller,or may also consist of just a propeller. 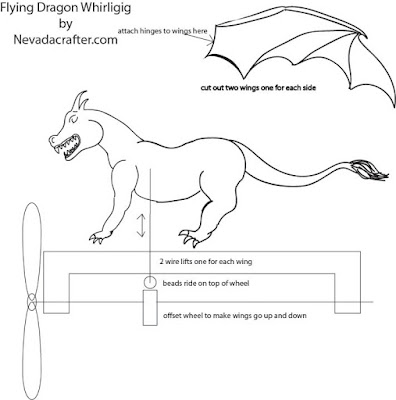 This is a concept idea and not intended as a pattern or plan. It has not been tested and may not work as suggested and further modifications may be required to make it work. The concept is to attach the wings to the dragon’s body with hinges of some type and then attach metal rods to the outer edges of the wings. The opposite ends of the metal rods would have some type of bead attached to the end so that it could freely ride an offset wheel which would be turned by a propeller. As the wheel turns it rises and falls lifting and lowering the dragons wings.

Please be sure and checkout our other blogs and web site for crafting ideas.
https://nevadacrafter.blogspot.com/
https://craft44.blogspot.com/ 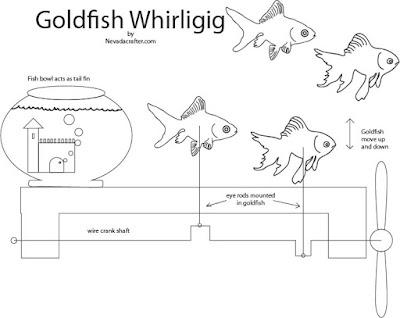 This is a concept idea and not intended to be a pattern. The design is not done to scale and has not been tested.  There are a number of ways this concept could be used and the number of fish is only limited to how long or how much space you have on the whirligig. The concept is intended to show how a wire crank shaft might be used. The propeller may have to be scaled up in order to get enough power to turn the crank and the propeller it’s self could be designed with goldfish at the ends of the propellers blades. Be sure to use washers and nut on crank shaft to keep shaft in place as it turns.
Thank you for checking us out.
Be sure to check out our other sites for more crafting ideas.
https://craft44.blogspot.com/
https://nevadacrafter.blogspot.com/
http://www.nevadacrafter.com/

Posted by Nevadacrafter at 4:22 PM No comments: 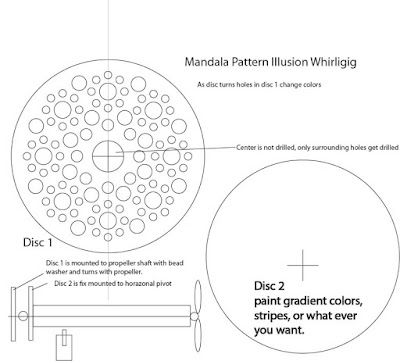 As I have stated before this is a concept idea only, not a pattern. It is a design that creates the illusion of dots that change color and makes a great kinetic art deco for the yard.
Posted by Nevadacrafter at 4:21 PM No comments:

Sometimes all you need is a good idea. 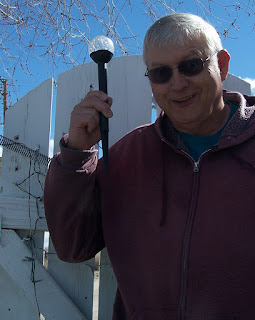 I had seen these globe shaped solar lights and used them in may other projects and after watching a great sci-fi movie realized they could be used to make a UFO. 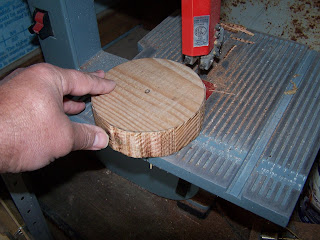 I began by cutting a circle out of a 2 x 6 scrap wood on my band saw, but I think I will use 1" of or thinner wood stock next time and glue pieces together as the thick cuts were somewhat difficult. 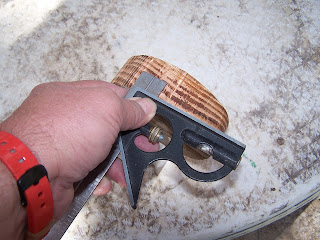 Dividing the circle in half with a pencil line. 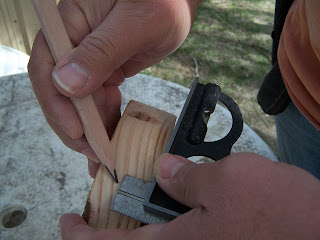 And then using a belt sander I began beveling the top and bottom edges into a flying saucer shape. 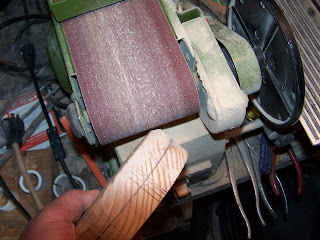 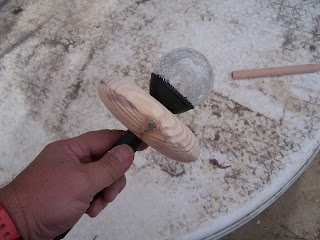 so it would sit flush is in the following photo. 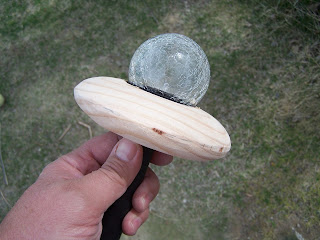 Then using 2 x 2's created the pivot and vein part to mount the UFO on top of. 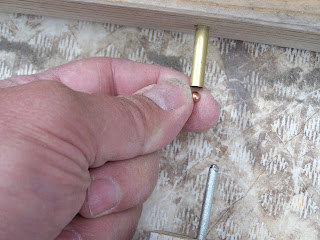 I used a screw that had no upper threads in the vertical mount, cut off the head, and using a drama rounded the top of the screw. 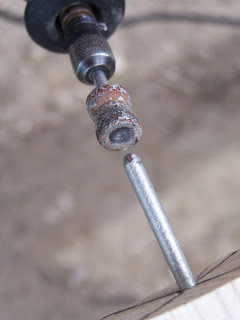 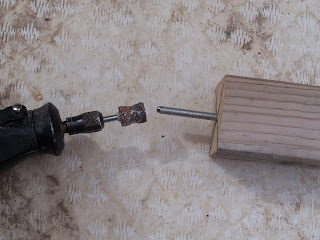 On the horizontal pivot I placed a brass tube in a hole I drilled slightly off center and then placed a BB in the tube to act as a bearing. 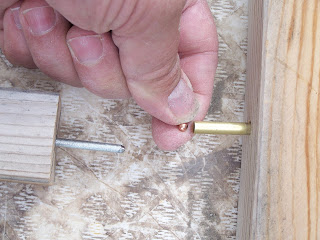 So I had something that looked like the following. 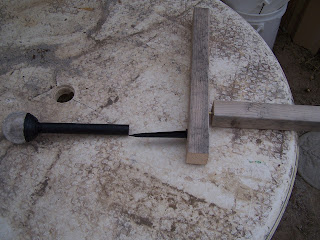 I took a plastic florescent tube covering and cut a short piece to cover the black shaft of the solar light. 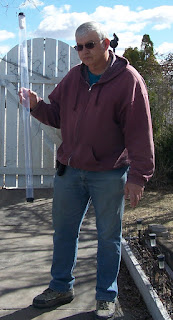 I painted the black shaft of the UFO solar light with florescent green paint and the inside of the clear tube with glitter. 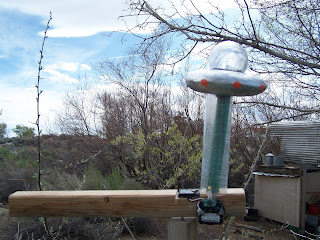 Cannibalizing a second regular solar light, I used a Dremel saw blade to cut solar light carefully apart without disconnecting any wires. I cut a channel in the horizontal 2 x 2 and fitted the solar cell there and mounted the rest of the components(LED, battery) under the clear tube. But I found this to be too bright and later painted the inside of the tube with more florescent green paint to dull the brightness of the light. 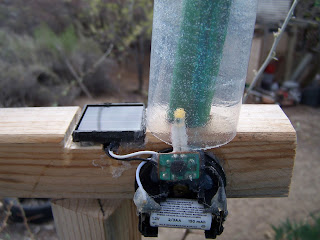 I will later mount some type of tail fin and cow being abducted as a counterbalance to the UFO. 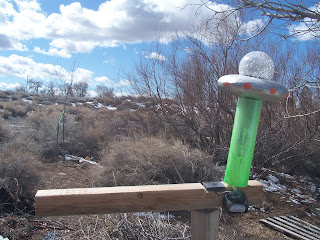 As you can see I'm still not quite getting the effect that I wanted and in a future design I will most likely use cascading LEDs for the tractor beam at the bottom of the UFO. 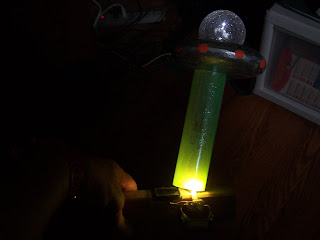 So far the project has gone well and I will update this post when it is completed. 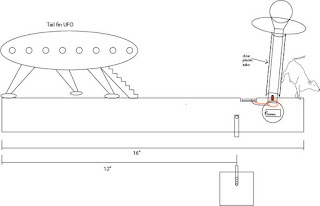 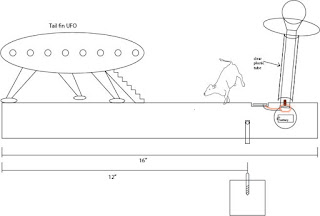 Not sure which one I like, so posted both. UFO on the back side is just a tail fin cutout to act as rudder in the wind. Cow is also just a cutout 1/8" stock or thicker. A propeller could aslo be added to lighted end.


Posted by Nevadacrafter at 10:53 AM No comments:

Who's catching who - Fisherman and giant fish whirligig

Who's catching who - Fisherman and giant fish whirligig 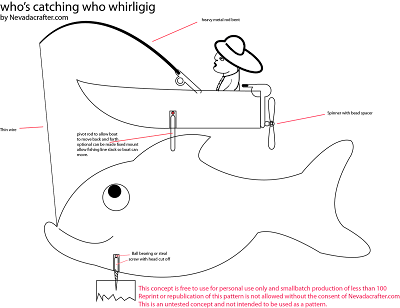 In this whirligig concept we used an optional second pivot. Depending on pivot placement, boat shape, ect boat should wobble back and forth giving the impression the fisherman is fighting the fish.
Unlike previous designs the bottom pivot is set directly in the fish and there is no need for a runner board or a tail fin. You do however need to make sure that the fish is cut out of 6/8" or thicker wood stock so it can handle the stress of the pivot.
There is a small optional propeller at the aft end of the boat. The boat motors is actually part of the boat for added strength when adding the propeller.
As always, keep in mind, this is only a concept design and has not been prototyped or tested. Adjustments in the locations of pivots and and types of materials used may have to be made.
Other considerations that need to be made are what types of weather the whirligig or weathervane will be exposed to. When designing a whirligig for areas like Nevada, smaller propellers may be preferable because of gusty high winds. Whereas along the coast where you're more apt to have constant steady breezes, larger propellers may be incorporated.
I hope that this concept design inspires you to create your own designs. For more concept and patterns please be sure and check out our website at www.nevadacrafter.com

Also be sure to check out our following blogs for money making craft ideas.
https://craft44.blogspot.com/ 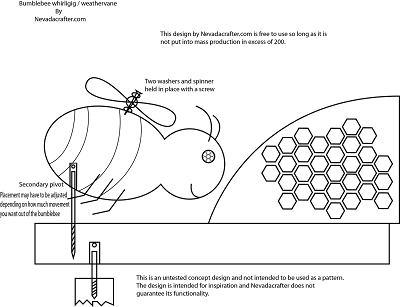 As with any double pivot system, the location of the pivot determines how much action or how little action in the pivot takes place. Moving the pivot for the bumblebee forward or back will determine how much back and forth movement the bumblebee makes. If the pivot is placed in the middle of the bumblebee, the bumblebee will have a tendency to spin. You will also want to take into consideration that the bumblebee needs to clear the tail fin as it moves back and forth.
The legs and antennae are made from wire and the eye can be a simple bicycle reflector. Tail fin can also be reflectors, cutouts, wood burned etching, or simply painted design. Of course as always the design can be scaled up or down depending on size whirligig that you need.  The bumblebee propeller wings are small, which is indicative of a bumblebee which has disproportionate wings to body size. The black body and orange stripes are whatever size and width that you desire.
The overall design is a basic double pivot whirligig/weathervane. The concept can be used on any design or theme. I hope you enjoy this design concept, feel free to give positive creative feedback.
Always be sure to check out our website www.nevadacrafter.com as well as our other blogs.

Have a great time crafting and thank you for checking us out.

Posted by Nevadacrafter at 2:22 PM No comments:

What type of woodworking patterns would you like to see?